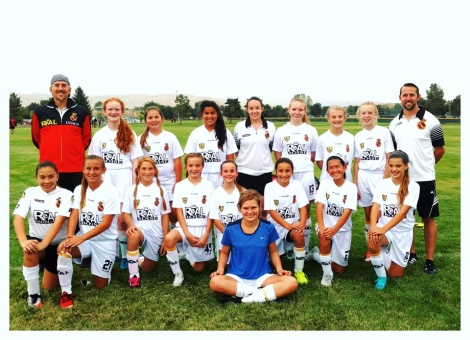 “We are very proud of our Real Boise 2005 Malaga Fire girls! They got silver at Gem State Challenge yesterday!  Getting to a final is never easy. Then, they had a very tough rival in the final but I feel the 5-0 score was not totally representative of the game given the way we play and the opportunities we had in crucial moments of the game” said DOC Juanjo Carmona.

Towards the end of the first half, still 0-0, the team had several unique opportunities to score, including a missed PK. Two of the Indie Chicas goals seems to have come after off-sides.

Our team was just formed this Summer and they have been working and playing fantastically. It was above expectations they would produce results so quickly!” Carmona added.

In league play, the team is second on the standings and they are hoping for promotion if not in the Fall season, in the Spring season.

This team is developing and playing well. A few weeks ago they were able to tie the strongest team in their league division, Rush Nero (0-0 draw):

Coach Derek said
“Malaga faced off against Rush Nero September 16th. Rush Nero has a very impressive team resume that is ranked at the platinum level and the week prior to our game bested Nova Gold 5-2. That meant nothing to our team, Malaga rised up for the challenge. Rush Nero tested all areas of our team and they had trouble penetrating our defense, with leaders, Clara Demars, Livia Mortensen, Annika Stringer and Emma Le holding a strong defensive line made it difficult for Rush to get any shots off. When they did Katie Kaba played a perfect game at keeper she didn’t allow any shots passed her. Our offense also played extremely well penetrating their back line and exposing weakness repeatedly. Holding midfielder Natalie Nafsinger and attacking midfielder Zoey forst made it hard for Rush to have any central movement. Outside midfielders Jocylen Chandler and Tiana Brasby Controlled the outside the majority of the game. Strikers Maganne Akins, Mia Law, and Heidi Brown made it extremely difficult on Rush’s Defense with their constant attacking combinations and pressure on their back line. Malaga had plenty scoring opportunities we didn’t capitalize on but Rush had a hard time facing our young but explosive Malaga fire team. This team has a bright future!”
We are all looking forward to a strong end of the Fall soccer season and to this winter to see how this group continues progressing during the futsal and indoor soccer events!