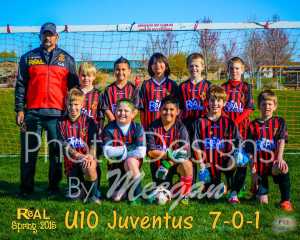 Formidable season for the Real Middleton CF U10 boys beating three Boise Nationals SC teams, two FC Nova teams and two Idaho Rush teams in the top division of the Idaho D3 League and finishing with a 7-0-1 record. “The team worked hard, played together, and supported each other”, said Coach Gerardo.

Winning this championship has also an added meaning for the soccer community in Middleton.  The Idaho Youth Soccer Association’s (IYSA) rules allow for clubs with multiple teams in the same division (the 3 big clubs in the District 3 usually have multiple teams in the same division) to bring up to 3 guest players in each game from their other teams making it extra difficult for small clubs, clubs in remote communities, and clubs in small communities like Real in Middleton to succeed against these big pools of players.

“This added challenge made our team stronger and more united”, said Juanjo Carmona, Real’s Director of Coaching. “We know, in fact everybody talks about this, IYSA’ “club pass guest player” rule benefits the 3 big competitive clubs, Boise Nationals, FC Nova and Idaho Rush. Many times, those clubs bring their best players from their other teams to beat you because when they play with their regular rostered players, they usually can’t. Lateral Pool Play may not be a bad idea when done properly, that is, when it is done in matches between clubs that have several teams in the same division. But when they bring 3 great guest players from their pools of 30+ players against small clubs, that can make a difference on a 7 vs. 7 format. Most clubs do not have that luxury. It is clearly a rule that needs to be revised because it puts many of our soccer youth in Idaho at a disadvantage before they enter the pitch. However, even with that disadvantage, we were able to beat all these teams with our 10 magnificent Middleton boys and to conquer the championship playing a very fun and entertaining soccer,” Carmona said.

Coach Gerardo is very thankful for the coaches clinics the club offers during the year, “the clinics help us a lot”, Gerardo said. All Real teams combined games this Spring season yielded a 60% average winning record, 70% if accounting for the tied matches!

As far as his incredible little U10 team that ended 7-0-1 and overall champions, Gerardo concluded “their work ethics are very good, their communication and shape are excellent and they play great soccer. After all, they play like ReAL players”

Interested players born between Aug 1st, 2004 and July 31st 2005 can come to tryout for Coach Gerardo’s team at Foote Park on June 1st and 2nd. Full tryout shedule is at:

Finally for U5-U9 players, our youth academy offers a professional program, very low prices ($25 and $35 per season), and free uniforms. For information and registration visit: